A super serious board game thing.

We were all pretty excited for this one to hit the table, so it’s no surprise that Cry Havoc showed up this early in my list of shame runthrough (wherein I play all my as yet unplayed games). 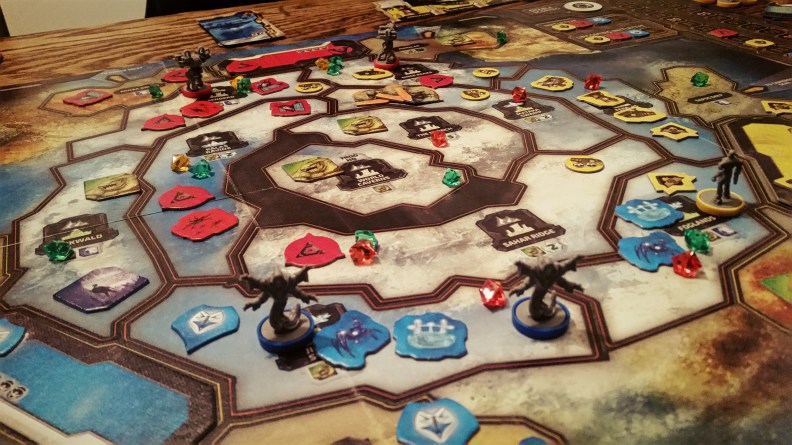 Cry Havoc is a tense area control game where the strategy is largely dictated by the variable faction powers dealt (in our case, randomly) at the start of the game. I played as the Pilgrims, where the path to victory seemed to be to construct VP-producing structures early on and pump them for crystals before the other players catch wind of your scheme. Late game, it was mostly about protecting what you’d built and maintaining control of your regions. I can’t speak to the strategies of the other factions (Shane played as Humans and Logan manned the Machines), but the Humans were many and the Machines were deadly. There are also the Trog, who inhabit the areas you aim to control. In a 3 player game, they are strictly a defensive nuisance.

This game was a lot of fun. You can tell a lot of time went into crafting and balancing the factions and strategies. The abilities are cool, the pieces look great, and the combat system throws unique choices at you in each battle.

The biggest drawback, though, were the poorly written rules and underexplanation of the powers, structures, and effects. This game could really benefit from an index of abilities because we spent a huge chunk of time hyper-analyzing the possible interpretations of the rules. The game relies very heavily on the orders of resolution, so unclear player abilities and card effects leave you with clumsy implementation and ambiguous outcomes.

Once I get my hands on a good FAQ for the game, I look very much forward to bringing this to the table again.